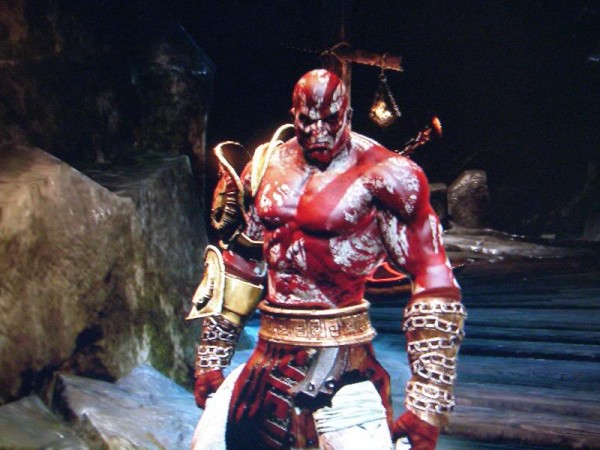 Over on Facebook my dear friend and esteemed colleague Anjin Anhut posted a small rant about being unhappy with the God of War Story, calling it a „total weak point“, and „lazy in writing or exploitative“. Afterwards a nice discussion started in the comments, one that I refrained from joining without having thought about this some. Now this post is me trying to adress his criticism in a structured manner and to provide a counterpoint to this discussion. 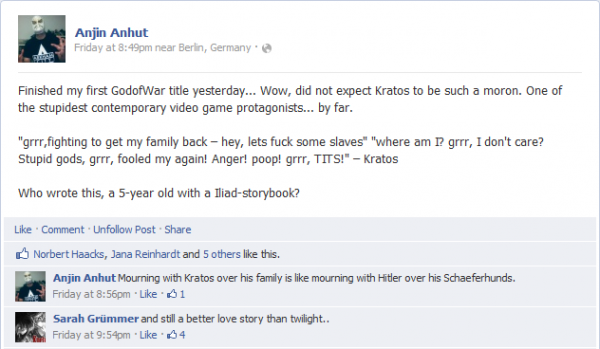 So a few words before I start: Anjin is generally spending a lot of his precious free time to write about discrimination and sexism in games. He fashions thoughtful, well-written and well-meaning articles that I enjoy to read. His work in that regard is invaluable and I appreciate it highly. The game industry has a series of serious issues with discrimination that we need to deal with. This article will touch on that topic since the protagonist Kratos is, as Anjin rightly put it, „a misogynist sadist inhuman monster“. By no means do I intend to belittle this issue.

Dissecting Anjins criticism I identified the following points, which make him believe God of War to be a terrible story:

Some of these points I can’t much disagree with. There is an especially strong case to make for the third and fourth points. Given the strong reliance on violent and gory imagery in it’s marketing and the oddly juvenile sex mini-gameplay, Anjin does have an argument there.

Still I disagree with the first two. These issues do not make God of War a bad story and one that we need to avoid in the future if we want our storytelling to mature.

And here’s my line of reasoning. Let’s start with the first point.

Kratos is an inhumane character and thus propagates values of inhumanity.
If we believe that games are a medium to tell stories, stories about the human condition and all it’s pleasures, pitfalls and peries. And if we believe that what makes games unique as a medium is that they give the player agency as the protagonist, that they put them into the shoes of a character, more than any other medium can, then we do need violent, sadistic and misogynistic characters in our games.

Whitewashing out despicable characters just because they are the protagonist of a game seems like unusually restrictive. A great many respected movies, tv series or books would not be able to exist with such a restriction. Breaking Bad anyone?

If we want to tell stories about sadism and misogyny (and we should), then that might (in some cases) require us to take on the role of such characters. Kratos is not a nice person. He is not a role model. Quite the contrary, he is despicable.

Simply by commiting acts of inhumanity in the guise of Kratos does not neccessarily glorify them. Quite the contrary, they can disgust the player, maybe going so far as to question the protagonist or even turn off the game, as one commenter in the facebook thread remarked.

Granted, God of War often visually emphasizes acts of violence (zooming, slow motion) and portrays women as weak sex objects (naked breasts, sex gameplay). An argument would be that this are tropes of the action genre and the time period of ancient Greece. The issue still stands that this is problmatic in and of it self. at least there is some cultural context for the nudity though, when compared to purely exploitative games such as Dead or Alive Xtreme Beach Volleyball.

And adressing the second point: 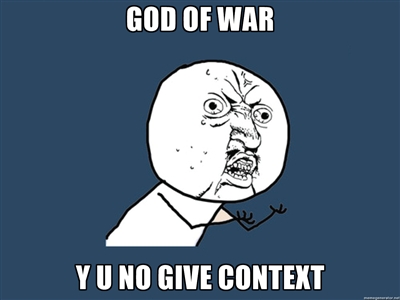 God of War does not provide context for Kratos’ actions.
I simply disagree and personally believe God of War provides a sufficient amount of context. It does so without lecturing and obviously spelling it out for everyone. It also does not place the following at the center of it’s themes and makes sure the player notices but it is there.

Let’s first look at many action games where the protagonist murders hundreds of enemy combatants and is heralded as the hero. Gears of War is an excellent example, that Anjin previously dissected and brought up in the Facebook thread. Here the game ends with a genocide of the „evil“ Locust race and the protagonists cheer and celebrate. The basic story of many an action game.

In God of War on the other hand Kratos is not a hero, at least not in the modern sense. Nowhere (as far as I can remember) does the game portray Kratos as the „good guy“. Quite the contrary. The inhabitants of this world fear him and flee at his sight. He is infamous for the atrocities he has commited. He is capable of great feats. And just like the heroes within ancient stories „great“ does not mean „good“.

Yet the game does not explicitly tell us that Kratos is not a nice person. It doesn’t say „you are playing the bad guy“. The player has to come to his own conclusions. Which is often helped since gameplay and story are well intertwined.

While personally playing God of War there is a section where Athens is being attacked by the gods and Kratos storms the city searching for something. Now here the player can simply run through the streets toward his goal, or he can break open doors and open chests. Since chests often contain valuable items as soon as I spied the first chest through a window I started breaking in all the doors and clearing out all the chests. After a few doors I suddenly noticed that I, out of my own accord, spurred only by the promise of reward, had effectively pillaged and ransacked houses without the game ever telling me to. And there were a few scenes like these in God of War.

Without giving clear context, God of War leaves things open to interpretation and of allows us to come to our own conclusions. Granted that might mean that some people come to conclusions I (or Anjin) do not agree with (such as idolizing Kratos and accepting the values he acts by) but that does not invalidate the story.

3 thoughts on “In Defense of a Violent, Misogynistic Serial Killer.”