The second day was the last day of the Summits and Tutorials. Since one of my objectives was to broaden my horizon I decided to join one of the workshops today.

(201) Intense Screenwriting Techniques
I chose a writing workshop, held by David Freeman, of The Freeman Group and author of the Creating Emotion in Games
book. David has a background in actual screenwriting for movies and TV and he wasn’t too humble to share it with us.

The workshop mainly consisted in him explaining his method: He uses distinct techniques to make his characters/scenes/plots seem either deeper or more interesting. He presented us 26 techniques to deepen scenes from the hundreds he teaches at his famous classes.

Two examples are putting a character into a “No-Win” situation or having a scene where “Character A’s actions unwittingly cause Character B pain”. It was actually quite interesting but I was somehow itching to go back to the Indie Games Summit so I skipped the rest of the workshop after lunch.

(309) IGDA Education Summit Working Lunch
Lunch was actually another event, as there was an education focused lunch held by the IGDA and moderated by Oren Ross and Noah Falstein (The Inspiracy), the latter whom I met at the Filmakademie in Ludwigsburg.

There’s not much to say here. I sat down with a couple people and we had some discussion on the topic. One of the guys at the table was an iPhone game developer from Denver who represented the “What companies want from graduates” view.

(304) How Do You Manage Small Indie Teams?
As mentioned, I raced over to Moscone North Hall after lunch to join in the Indie fun again, and thank god I did! Kellee Santiago, Producer of the thatgamecompany was holding a lecture on how to manage a small indie team. Her presentation was exceptional and very helpful. Granted many of the things she mentioned should be common sense, but as is so often the case: it helps when someone spells them out.

I also had the chance to talk to Kellee after the lecture which was very insightful. Also she invited me to the Indie Party (sponsored by 2D Boy, thatgamecompany and someone else) later that evening. While the party was free for all I didn’t know about it until then and it was a blast!

(304) Indies: Beyond Single-Player
This talk by Jason Rohrer, creator of many very concept focused games (like Gravitation and Passage) was focused on the fact that many Indie games seem to focus solely on singleplayer. He made a few good points but all in all I have to admit that the lecture just didn’t stick. Maybe I was not paying attention or maybe there was not enough rough substance for my memory to hold on to. Either way, I have little to say about the actual content.

(304) Hothead Games: Episodic Content and The Evolving Indie Landscape
Vlad Ceraldi and Joel DeYoung of Hothead Games were holding this polished presentation to share their experiences with digital distribution and episodic content gathered from the creation of Penny Arcade Adventures.

I found especially interesting in how their percieved benefits for Episodic content came true (faster revenue, ability to tweak game based on feedback, smaller cost creates lower buy-in hurdle for new gamers). One thing that they did not expect though was the amount of negative feedback they got for their episodic strategy. A lot of players seemed to assume that they are simply breaking apart a game to sell in smaller chunks for more money. This actually lead to them abandoning the Episodic method for their next game Deathspank.

(309) A Guided Tour of The Art of Game Design: A Book of Lenses
In this lecture the author of the abovementioned book gives an overview. And since I’m currently reading and recommending the book (borrowed from the esteemed Dr. Helbig) I though I’d sit in on that lecture. Unfortunately I had to cover quite a distance from one lecture to the next so I missed the first half. Not much to say about the lecture though. It was good and entertaining but I felt that he reiterated much of the book. I regret not having bought the cards to the book. Otherwise I could have done like the one guy from Crytek who had 3 sets and got them all signed. I will get them though…

(304) Making LOVE in Your Bedroom
Hurrying back to the Indie Summit I came in to see the last 15 minutes of this presentation. Eskil Steenberg was showing off his completely self-made MMORPG LOVE. The project is really beautiful and great to watch but the complexity of backend and editors he showed were just scary. He’s built his own modelling and uv-mapping tool for chrissake!

Funny was how he wouldn’t stop talking. The next speakers were already setting up and standing there. To continue with the program the room had to practically applaud Eskil off the stage. Even then he got some extra time at the end of the summit to show more of his stuff.

(304) How to Finish a Game Project You… Hate?
Contrary to the title, Alec Holowka (Aquaria) and Tommy Refenes (Goo!) did not talk about actual techniques to reinvigorate your love for your game. The lecture was more like a short postmortem for each game, focusing on the problems and troubles. Goo! for example was suffering from a lot of reworking and eventually of one person of a two man team leaving the group only later (after an IGF award) wanting to get back in. Beyond that I have little more to say on the talk but I guess the lecture was alright and Aquaria looks really nice.

IGDA and Indie Party
Tueday evening I went to the IGDA party, which was free since I was a member. Unfortunately the event just didn’t do it for me so I decided to skip after not even a full hour and I headed to the Indie Party, where I got drunk with a lot of other people I didn’t know. I had a lot of fun though, and there’s this picture here: 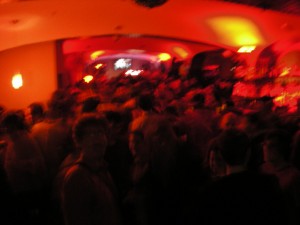