With the Summits over after Tuesday it was now time for the regular conference. The noteable differences were: More people, no unified theme for the sessions and just plain less time for lectures.

Indies SIG
My first stop of the day was attending the Indies SIG roundtable. To elaborate: the Indies SIG (Special Interest Group) is a small, informal group of people within the IGDA (International Game Developers Association – gotta love dem Acronyms). This was basically a meeting trying to figure out what the IGDA in general and the SIG in particular can do to be of more benefit to it’s members. Since membership in the IGDA costs (~50 USD a year) the association has gotten some flak lately from it’s members that it does not really do anything substantial.

The roundtable was very poorly attended though. We were maybe a dozen people but there were some good ideas. Best (IMHO) among those some were sort of event calendar (Indie awards, Game jams) and a mentor program. Let’s see what comes of this.

Building Your Airplane While Flying: Production at Bungie
Because I forgot my SD card I couldn’t really make any pictures but for Wednesday I borrowed Kevin’s (the friend I’m staying with) SD card and made a few photographs.

Here’s one from this lecture: 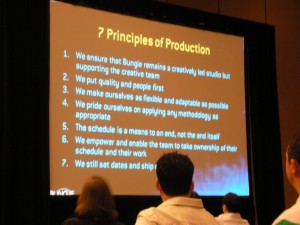 The talk itself was about the improvements Bungie made in it’s production organization after the mess that was Halo 2 without losing the studio culture. Allen Murray outlined the methods used to get there: One was increasing the number production staff (11+ Producers for 150+ Developers). Of course this alone is not a solution so there are a few other things in place, for example: There is a non-negotiable polish phase planned. This can not be removed under any circumstances and is (IIRC) 2 weeks per person. Also the producers at Bungie do not design, that is they do not take design decisions. They also worked to make their scheduling more transparent by providing a HTML output to everyone. Team members are constantly updated on their own schedule but can also look into everyone elses planning.

The talk was very informative and I did like that Allen mentioned the importance of physical architecture on the design team. The Bungie offices have been redesigned into a more open space where teams can be easily formed by moving people around.

Balancing Multiplayer Competitive Games
David Sirlin held this lecture on the design of MP competetive games. Being a professional Street Fighter player for many years the talk was undoubtedly colored by David’s experiences with the game.

The most important thing though was what he called self-balancing forces. These are mechanics that are so designed as to make exploits harder or impossible. The example he gave from Guilty Gear (fighting game) was a mechanic to avoid juggling the opponent in the air with a constant flurry of punches. All the game does is increase gravity after every punch, eventually making it so high that the attacker does not have time for a further attack. That’s just god damn clever and yet so simple!

Germans unite
And that was the last session. I spent the rest of the day at the Expo, talking to the Germans I met. That is the Games Academy Booth and the boys and girl from Brightside Games who were at the GDC for the IGF nomination of their student game Zeit². I was also briefly at the German evening, organized by the Messe Koeln but left early. 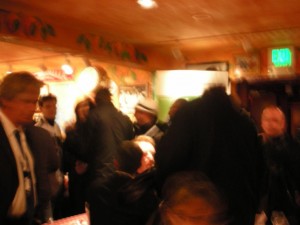