GDC Microtalks – One Hour, Ten Speakers, Unlimited Ideas
The first session of Thursday were the Microtalks, each one being 6 minutes from one speaker talking about some aspect of games. Unfortunately I got up a bit too late and missed the first half. I only saw Robin Hunicke, Eric Zimmerman, Clint Hocking, Jenova Chen, Frank Lantz and Jane McGonigal.

Regardless I have to say though that this was one of the best lectures at GDC. The talks were all very interesting and refreshing, each one handling a different topic. In short:

Robin Hunicke said that home sucks because it’s no fun. Players are searching for their on fun, like trying to stand on benches. She had a couple of play-like suggestions for features to add to increase the fun: For example a graffiti-like system.

Eric Zimmerman was more of an action than a talk. What we did was play a game where normally useless scraps of colored paper suddenly became meaning as groups of the audience tried to form up.

Clint Hocking ranted about the problems with the 100% rating system and opted for a simpler, less inflationary 5 star system.

Jenova Chen was talking about the possibility of different kinds of “fun”. Like the early cinema games offer “primal” experiences. Film has moved beyond that with a wide variety of genres. What is in store for games and how can social play evolve beyond chat lines?

Frank Lantz argued that games are not a medium as we often say, since they were present before the advent of digital computing and will be around afterwards.

Jane McGonigal, the last and in my opinion best, speaker was talking about “kindness to strangers”. How behaving like this makes us feel good. The internet tends to have a bad kindness ratio since people are very anonymous. Left 4 Dead on the other hand has very kind players who help one another.

From COUNTER-STRIKE to LEFT 4 DEAD: Creating Replayable Cooperative Experiences
Held by Valve‘s Michael Booth it dealt with the thoughts behind the design of Left 4 Dead. Their initial thoughts were the lack of co-op games, which is both a risk and an opportunity. Togeter with Valve’s skill at creating epic singleplayer (half-life) and compelling multiplayer (counter-strike) experiences this would provide an opportunity to merge these together to create a multiplayer game with singleplayer feel.

Everything in the design had to follow the fact that cooperation was to be essential. This strong focus can be considered one of the strenghts of L4D and it’s responsible for things such as a lack of classes or the small number of weapons. 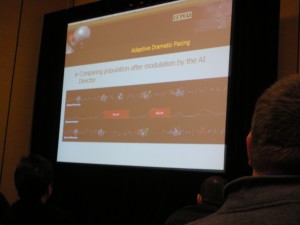 As a L4D player I also enjoyed the look at the pacing algorithms of the AI Director and how to create anticipation and suspense. Also the reasons for why the special infected were designed the way they are in the game were very interesting.

Helping Your Players Feel Smart: Puzzles as User Interface
Randy Smith of the recently founded Tiger Style Games was holding this lecture on the design of puzzles. The puzzles he concentrated on are those that are spatially present in video games, such as Tomb Raider. Considering those as “normal” User Interfaces and viewing them as such was at the core of this lecture. One of Randy’s chief inspirations seemed to be an interface design book called The Design of Everyday Things, which looked really interesting.

Basically the mentioned principles boil down to the following:

All in all the lecture was interesting but I didn’t feel that it brought me much new information. I believe that it could be held in half the time and still work just as well. An important tidbit though was the comment from another member of the audience: She(?) mentioned Cognitive Walkthroughs, a “usability inspection method”, as a sort of method to analyze your Puzzles.

Have You Got Perfect Pitch?
A panel of industry veterans giving a view on the pitching process from the other side of the table: Lee Jacobson (Midway), Michael Denny (Sony Europe), Sebastien Motte (Microsoft) and Dan Winters (Activision) all provided some helpful insight.

In general it seems to break down to the following points:

What was surprising to me besides these (somewhat obvious points) was that pitching a project is not done to the decision makers but rather to a subset of the company. These guys have then to promote it within the company to make sure it gets through. For this reason it’s good to build your pitch so that it gives them something to work with when trying to convince the decision makers.