The last day focused primarily on Level Design for me. Unfortunately too many interesting lectures were again on the same time slots so I was forced to pick and choose.

Everything I Learned About Level Design I Learned from Disneyland
The first lecture was translating the experiences of the Disney Imagineers, the creators of Disneyland, to the discipline of Level Design. It was held by Scrott Rogers. The slides to this lecture are available on his blog here.

While the talk was entertaining I unfortunately didn’t get too much from it since I was already familiar with many of the mentioned techniques. Maybe from the other articles on using Theme Parks as Level Design inspiration, such as the book the Art of Game Design (See day 2 for more info) from Jesse Schell or the following three Gamsutra articles from Don Carson: Article 1, article 2 & article 3 (Thanks to Tinkergirl for providing the handy links at her blog post on the same subject).

Anyway, with all that said, let’s just get into the lecture itself and what I think might be interesting for you: 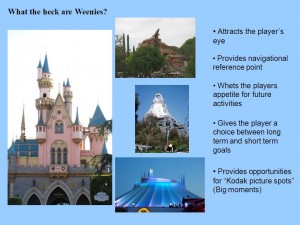 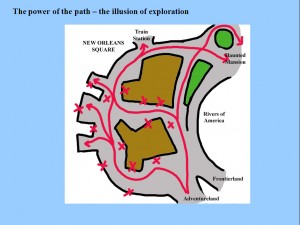 Beyond Balancing: Using Five Elements of Failure Design to Enhance Player Experiences
This interesting take on game design was present by Jesper Juul who’s written quite a few books and articles on the subject of games. In this short lecture he took a look at how and why failures are important for design. Interesting for me was his distinction between Casual Gamers and the Hardcore. The former don’t like to fail while the latter do not mind to, since they want a challenge. When they fail their previous mode of play failed and so they need to adapt to overcome, something they enjoy.

Jesper further elaborated on how to properly design failure. He focused on the fact that bad failure is one that costs the player too much while good failure punishes just enough. He laid out the 5 costs of failure that a designer should be aware of when designing the failure mechanisms in his game:

Using these five questions failure should be designed to fit into player’s lives.

Aarf! Arf Arf Arf: Talking to the Player with Barks
Patrick Redding from the Far Cry 2 design team at Ubisoft Montreal held this 30 minute talk on the use of random audio snippets of actors to enhance the game experience. The talk was quite technical at times but interesting to listen to. The primary takeway for me was:

The functions of “Barks” are:

UI Art Production from the Ground Up
The description of this talk from David Rose, Lead UI Artist for Neversoft sounded intriguing. Shortly after start I chose to leave the presentation though. Not for the subject matter but for the way it was presented: Unfortunately David chose to simply read out loud the text written on his slides, something that is too dull for me to pay much attention to. So instead I left and went to see another lecture:

Learning from the Atari 2600
Coming late to Ian Bogost‘s talk on the Atari 2600 and it’s technologically based game design was worth it. – more later.