Last Friday and Saturday the Browsergames Forum 2011 was held in Offenbach, Germany. As you can guess from the name of the conference it’s all about online games run in the browser with free-to-play being a big part of that equation.

I attended BGF last year with a talk about the qualities of virtual goods. While I didn’t have enough time beforehand to prepare another talk this time I was fortunate enough to sit on a Panel about the future of F2P monetization with: 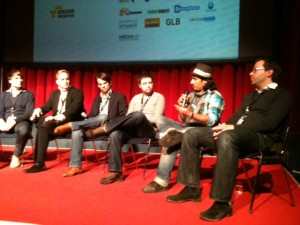 I was quite happy with the panel and would have loved to focus even more on the potential developments in the F2P marketplace. I felt like we barely got started when we were already running out of time.

Apart from sitting in the panel I spent most of the time talking to old (and new) friends and colleagues. And if I wasn’t doing that I sat in the other talks and panels and tweeted as much as I could. So from the huge flood of #bgf2011 tweets, here are a few choice moments. Be aware that this is me reiterating what the presenters showed or talked about – there is room for error in there.

And there you have it, my slice of the BGF talks. In general it seems that the topics mobile games and the interest graph were pretty important. Let’s see where they are at next year.