Picking up an idea from Gunnar Lott / Herr Kaliban I’ve decided to compile a list of all the interesting things I stumble upon over the week into a weekly digest. Not all of this will be games, but all of it should be interesting. So here we go, the first installment of Sunday Links:

Video: Sequelitis review of Mega Man X.
An excellent look at teaching gameplay without text. I’ve looked at some other videos in the series and can recommend all of it so far.

Video: Innovative Mobile Phone packaging
Imagining the packaging as a book and introducing the new user to the phone step by step.

Image: The current state of the games industry

Image: The history of game content added after the initial release 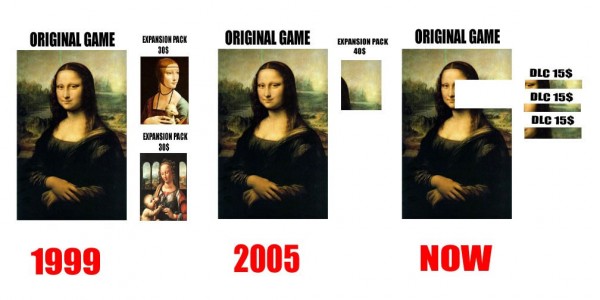 Video: God Bless America Movie Trailer.
From the looks of it this movie is going to be a hilarious mix of Falling Down, Natural Born Killers and the MTV celebrity craze of today.

News: Zynga signs a merchandising deal with Hasbro.
This shows how video gaming has met the mass market and will soon be flooding the stores everywhere. Toyboxes, board games, it’s going to happen. Let’s just hope there’s Mass Effect LEGO and Deus Ex NERF guns somewhere along the way.

Interactive: Scale of the Universe
A simple slider and a display of different objects at different sizes. Nicely done

Video: A Day Made of Glass, Part 2.
The first part swept the internet about half a year back. Now Corning Glass is back with more.

Image: The “what people think X is like” meme for tabletop RPG player

Video: Marvel Avengers Trailer.
Screened during the Super Bowl this is an extended version.

News: Double Fine Adventure Kickstarter.
You should have heard of this: In less than a day Double Fine raised a million dollars for their next project. Currently it’s at 1.5 million with over 30 days to go. There’s been a lot of talk that this might change the games business. It’ll certainly make the big publishers listen up but if it really brings a large change? I’m not sure.

Image: A flowchart to help you figure out which movie business job is right for you