Another batch of links for this week. This time we’ll start off with two shameless self-promotions: 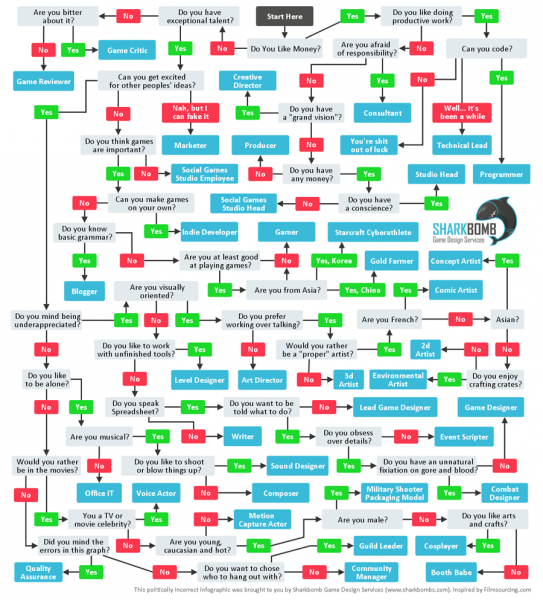 If you want to find out what kind of Game Development job you should be doing, then consult the above diagram. Also handy to check if you’re currently in the right job for you.

Also, just to make sure I’m not misunderstood: This is an attempt at humor. I’ve spent a couple hours spread out over the last weeks to craft this politically incorrect diagram. It was originally inspired by the Filmsourcing.com Career Diagram. Compared to the inspiration I have to admit I might have gone a little over-board regarding the size of the thing (and thus the complexity). In my defense: there were just too many cynical jokes to make to pass up! 🙂

Article: Crowdfunding: The Good, the Bad and the Ugly (German)
The above link leads you to an article about Crowdfunding I wrote. It’s been published as a guest post to the German Indie Inside blog and I am pretty happy with the result. If you’re interested in the topic and capable of understanding German, then please give it a read and let me know what you think.

Link: Humble Indie Bundle V
The latest Humble Bundle is a veritable mountain of goodness. They include Amnesia, Limbo, Sword and Sworcery, Psychonauts and even Bastion if you beat the average. All of those games are truly critically acclaimed. I personally played half to them and certify their awesomeness. Bastion alone is worth the price of admission so if you don’t own these games, get them.

Link: Mr. Div
A tumblr showing various motion design graphics as animated GIFs. I do really like the style in many of those and the ideas. Granted it’s a bit hit or miss sometimes but that’s always bound to happen with a fixed release schedule (one a week). Still I found them inspiring so have a looksie.

Link: Snesbox
This website allows you to play a wide variety of SNES roms in your browser. That’s pretty much all there is to say about it. If you want to relive the glory days of the Super Nintendo Entertainment System, this is the place to go.

The new Tomb Raider reboot has had a new trailer released this week. And I must say it’s quite a good trailer at that. Granted, it shows a lot of footage we’ve seen before and it may be a bit lengthy but that does not diminish it’s impact. The mood and themes evoked are excellent. For some reason the reboot reminds me a bit about Lost with the lonely island setting and the other groups of dangerous people Lara is locked up with.

Regardless I really liked the direction they are taking Lara the first time I heard about it and this piece of marketing certainly has me convinced that they might be able to pull it of. I’m pretty excited for the game and since that trailer above already felt a bit spoilery I might have to give myself a Media Blackout on this one. Well for everything but the review scores when it comes out… March 2013.

On the topic of Media Blackouts: I have figured out for myself that I do enjoy narrative media (mainly movies but some games) more the less I know about them beforehand. This is a reason why I’m trying to do the same for Prometheus, yet with the world wide staggered release this is bound to become difficult. How about you guys though? Ever tried a self-enforced Media Blackout?