Round 4. This time with a bit more audio material, so enjoy the pretty pictures, videos and tunes. Also note that since I will be at GDC next week I won’t be able to provide you with a link list for next weekend. I will however try to tweet during the conference to keep you people updated. Follow me at @mnerurkar. Regular programming will resume afterwards however. 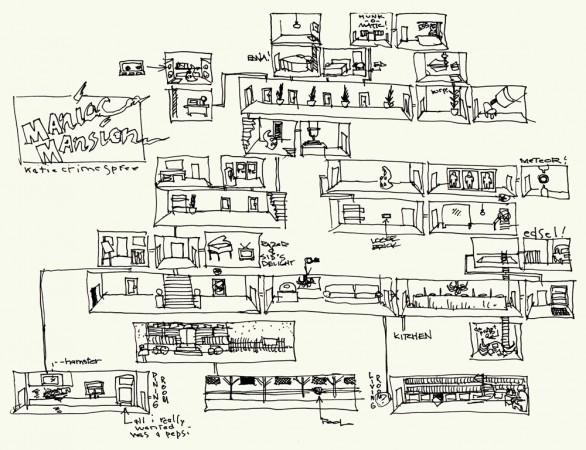 Mapstalgia is a blog about video game maps drawn from memory. It’s an excellent insight into how people perceive spaces and the topic of “cognitive maps“. Also there’s some sweet nostalgia in there such as the map of the Maniac Mansion pictured above.

This video from car maker Audi shows some concepts for possible use of OLED technology within cars. Very futuristic and awesome to watch. Unfortunately the video has no sound – at least for me.

This small trailer from PS3 game Journey gives a “glimpse” into the sound behind the game. Definitely goosebump inducing and that game is probably what will get me to finally buy a PS3. I am very much intrigued by the concepts in that game.

Image: Another Castle Comic
This short comic remixes the world of Super Mario Bros. It follows Luigi as he tries to make his way in the real world and how it clases with the Mushroom Kingdom.

Link: OK Cupid, 10 Charts about Sex
OK Cupid is a dating site that’s big in the us and they have an excellent blog where they correlate seemingly absurd data about people with their behavior and success (and failure) when it comes to dating, love and sex. There’s a lot of interesting “truths” to be found there and it’s not without it’s share of hilarity. An interesting and insightful read and it makes me want to do see something as equally odd with gaming data like: People that eat cornflakes are better at Battlefield3. 🙂

A funny and well-made song about the movie series Die Hard. Worth listening to.

News: Springer looking to sell Gamigo (german)
The media conglomerate Springer is looking to sell the F2P online MMOG publisher gamigo. Coupled with the looming demise of Reakktor (save them), the company responsible for Black Prophecy, the F2P Space MMO things don’t look to good at that front.

An excellent song from an excellent game that ended up stuck in my head this week. If you haven’t played Bastion yet I urge you to. It’ll make the lyrics that much stronger.

Link: A History of Gaming’s Most Shameless Rip-Offs
An article by IGN that generally argues against copying game mechanics. Posting this article on facebook prompted a small discussion about copyright and copywrong in the comments. I’m not a big fan of IGN and the commentary in the article but I thought it was an interesting look at the history of games. The entire topic of copying, cloning and innovation is probably best served by watching the Everything is a Remix videos I posted a few weeks back.

Link: 10 Series That Changed Beyond Recognition
Another IGN article, this time looking at the evolution of some franchises and how they changed. Again this article sparked some controversy on facebook. The result of the discussion was that I believe that it’s a good thing that IPs are broadening and we’re seeing more slices of our favorites universes. After all this is a given for modern IPs. Look at Mass Effect or Assassin’s Creed as an example. So if the sole argument against the reusing of old IPs for new and different games is nostalgia then that’s not really a valid one. There’s little reason to put old games on some kind of untouchable pedestal. However it is fine to not like the new game if it somehow lost sight of the core that made the what it was (to you).

Image: Hero Evolution
A look at different incarnations of our favorite Nintendo heroes.

Link: Rmory Studio
A concept art studio in germany devoted to designing weapons. They have some pretty cool material on their website.

A typographic animation in which Ira speaks about writing and storytelling in particular but I believe his ideas and concepts are true to all kinds of people trying to get better at a creative task. I know I’ve said so myself before. I especially enjoyed his remark that people with great taste could be really good at their passion but they will also have the most pain since their output will not match up to their expectations.