And number nine, now with 100% more Game of Thrones among other things 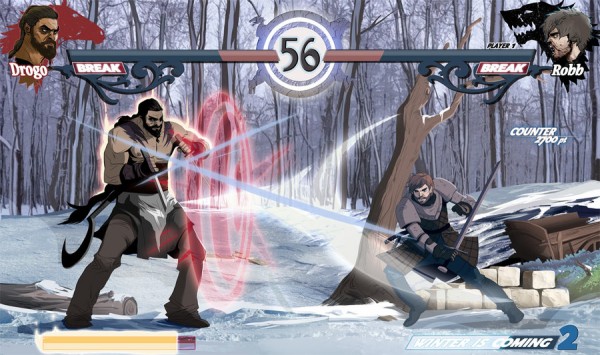 A cool image of Game of Thrones envisioned as a Fighting Game. Here’s the link to the DeviantArt Page. But that’s not all. There’s currently two more images that can be found on the artist’s blog and these two are even better than what you see up there.

Link: Game of Drinks
Hangover is coming. The link is to a blog that I’m guessing is written in Italian, yet the images are in English so everyone should be able to understand. They show the rules to a Game of Thrones drinking game, which looks pretty deadly to me. What I did like most is the way how the different houses are represented: You pick one from the available big four and that determines which alcohol you have to drink. There’s always a low alcohol and a high alcohol beverage involved.

Audio: Seven Day Cooldown – The Tangy Zip of Gaben
This premiere podcast features none other than Gabe Newell from Valve Software. They talk about the different games of Valve and it’s corporate ideas and competition. I really enjoyed the interview because it feels like Gabe is talking very candidly. Especially the parts about Apple and EAs Origin were most interesting. Also for some reason I feel this interview shows a lot about the corporate culture at valve, which oddly enough was laid bare a bit more this week already.

If you haven’t seen it, there’s what looks like a legitimate copy of valve’s new employee handbook out on the internet. This of course gives a good insight into the corporate values and ideals, which seem very sensible. Most strikingly I found valve’s way of dealing with that mess: by actually posting the leak on their facebook page.

Link: Startups, This Is How Design Works
A nicely done website about design as a discipline, what it’s goals are and why it is important. They list a set of different design disciplines but don’t mention video games at all, yet I think this is an excellent primer into design for non-designers. The website also argues a lot for the designer as part of the funding team of a startup and gives a few successful examples. Generally a sensible idea for any kind of project that builds products that will be used by humans. In my mind that is where design works, in shaping the interface between product and user, which in the case of furniture for example is primarily the physical shape. And of course if you want to pull in some attention having someone who knows how to make something that people like to look at is generally a good thing to have.

Link: Pentametron
A wonderful website that searches through tweets and looks at those that have the right size and ending to make a small, rhyming poems. To say it in the words of the website: with algorithms subtle and discreet / i seek iambic writings to retweet. Pentametron is done by the artist Ranjit Bhatnagar and is a pretty cool idea and generates some interesting results.

For some reason it also reminds me a lot of the Sprichwortrekombinator. As you can probably see by the url it’s a german site and it’s in german so I’ll explain. What it does is take german idioms, hack them in half and then put a random beginning to a random end. These are always hilarious and sometimes still ring true.

I guess both websites are wonderful applications of a controlled chaotic output that makes people want to look for the meaning.

Image: Mass Effect Comics (Spoilers!)
So I’ve recently had another pinterest pinning spree. After working on my N7 NERF Gun (pictures will follow soon) I’ve again been immersed in Mass Effect so I spent some time pinning pictures to my Mass Effect Board. While I was doing so I found a lot of comics about Mass Effect so that I decided to open up my own Pinterest board for that. Unsurprisingly half of the newer ones deal with the ME3 ending and how they would have done it differently so beware – there be spoilers. And the other half deals with the romance options, usually by showing a lot of Garrus.

Video: Extra Credits: Crowdfunding
This weeks episode of Extra Credits talks about crowdfunding. As always the episode is well made but if you’ve already looked into the topic somewhat there’s little new. Since I’ve spent some time thinking about crowdfunding I kinda enjoyed the fact that they pretty much said what I already believe. Oddly enough that happens a lot with this show. Thinking about it this is slightly unsetteling – do I like the show only because it validates my opinions? I guess I need to find a show I agree less with.