So, I’ve seen that 17 minute Hitman Absolution walkthrough of the library level. It basically shows what looks like most of one level and Agent 47 expertly evading the police that’s on his tail. Now that gameplay section looks well crafted and interesting but what stuck out to me, in a good way, was the NPC dialogue that features prominently. In case you haven’t seen the video, here’s the YouTube version:

END_OF_DOCUMENT_TOKEN_TO_BE_REPLACED

Just a few days ago I held my GDC Europe lecture called Big Bucks for Bits and Bytes – a holistic approach to monetization. I’ve spent a lot of time preparing and was quite happy with the result. The slides are now available on my slideshare account. You can download them from there or watch the slides online. 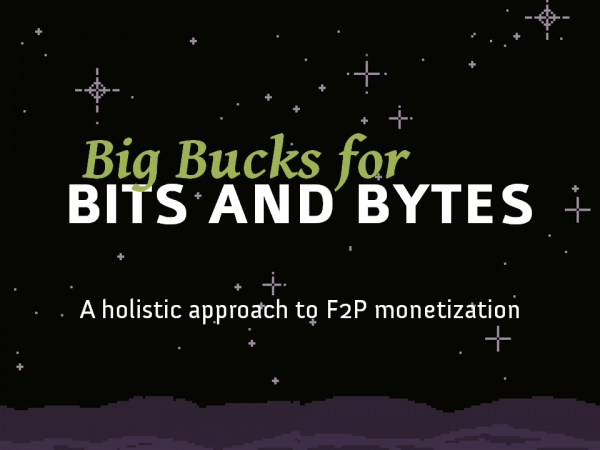 The slides are released for personal use only. If you have questions, need further information or plan to use the presentation for anything other than personal use, please get in touch with me.

Another GDC is coming up and again I’ll be there.

As for the last two times I’ll try to keep this blog at least somewhat up to date on the happenings. Most likely though I won’t be able to write a lot while in San Francisco since GDC is always quite a busy time.

Instead I’ll be focusing on twitter this time since the bite-sized posts should be easier to handle on site. Don’t fear though since I’ll be sure to take enough notes to post lecture reviews afterwards though.

I’ve gotten a lot of requests to release the slides from the Qualities of Virtual Goods presentation that Volker and I held at the Browsergames Forum 2010. So now that I’ve cleaned up the slides some I can make the available as a handy PDF download:

The article is released for personal use only and it’s copyrighted by Gameforge Productions GmbH. The exception are the images licensed under Creative Commons and clearly attributed. If you have questions, need further information or plan to use the presentation for anything other than personal use, please get in touch with me. 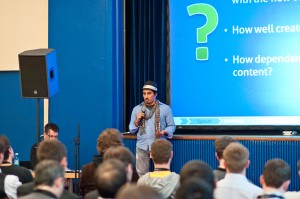 Just got back from the Browsergames Forum 2010 and it seems like the presentation from Volker and me was a success:

We’ve had a packed room, even though it was too hard to find and not really in the schedule. The talk itself went really good, even though the handheld microphone was a bit of a bother. And then after the talk we got lot of positive feedback from the audience, through twitter and all through the rest of the forum. I’ve even had someone compliment me on the talk in the men’s room.

As for the talk: I’ll be putting the slides up shortly. We’ll have to adjust a few things first. Watch this space for the download coming sometime in the next few days.

So I’ve been playing the Web Game Echo Bazaar a lot lately and this sparked some thoughts about narrative design & story in MMO Web Games and common game design standards.

First off let’s talk about classic Role-Playing Games for a minute here. The key thing in many tabletop RPGs is the story; they’re all about telling a story together. They’re at their best, when the individual player has to take meaningful choices that shape the ongoing story. What makes these decisions so strong is that they are irreversible. Whatever you chose you have to live with, which will make you think more about how you play and act.

This is something that’s usually lost in video games. With the (expected) ability to save and load previous states of the game, a story decision loses much of it’s weight. You can decide one way, see the consequences, then load and chose the other options. This somewhat “cheapens” the decision because it makes it possible to evade the results of your actions. Games can somewhat work around that by delaying the consequences of an action. That way, by the time you hit the consequences you’re not as likely to go load a very old save game.

However the persistent and shared worlds of MMOs can help here. Actually it’s both a boon and a curse when it comes to narration. A boon since load/save features don’t really work with persistent worlds (and aren’t expected) MMOs have the potential to have meaningful narrative decisions. It’s not quite that easy though. The curse of the persistent world is that with so many players sharing a space it is difficult to create a story that feels unique and that can have any impact on the world, since it shouldn’t inconvenience the other players and their story. 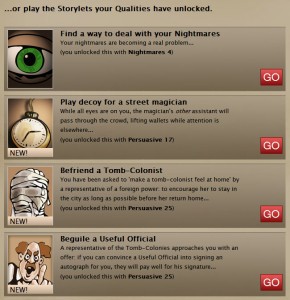 That’s where Web Games (and Echo Bazaar for that matter) come in though. Since these don’t represent a shared “physical” virtual space, the stories can feel a lot more intimate.

Echo Bazaar does quite a good job at this, presenting you with a wealth of narrative bits that you can choose to create what seems to be your own story. For example there are often options where you have multiple “tasks” leading up to one final decision.

Here the decision feels like it has much more narrative weight, since you can’t just go ahead and do it differently. Well at least that was what I thought when I first took one of these decisions. Unfortunately though this is greatly weakened by the fact that these composite tasks (multiple jobs leading to one decision) can be replayed for a while, allowing you to do the same thing over again.

So to put things in a nutshell: MMOs have the potential to present really meaningful narrative decisions to the player since decisions can be final. 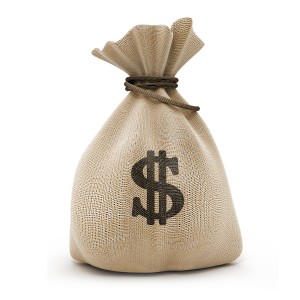 I’ve just submitted my proposal for a lecture at 2011’s GDC in San Francisco. In line with my day-to-day work of consulting external studios, the talk will focus on how to monetize free-to-play games.

It’s titled “Big Bucks for Bits and Bytes“. Let’s hope they’ll green light it. I’d be thrilled to share my experiences and ideas with other game designers.