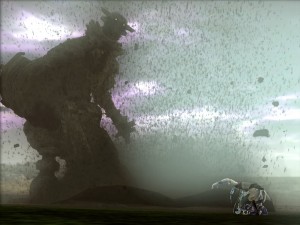 Hey everyone. I’m still around and I’m sorry it’s been quiet again for so long. The usual excuse of being busy applies, but it’s not just life and work:

I’ve started working on another bigger article. It started out as a small work related piece of research and has grown into a bigger article about Bosses and Boss Fights in video games. I hope to be able to post it this month.

Maybe I’ll be able to do a few smaller pieces in the meantime, but don’t count on it. 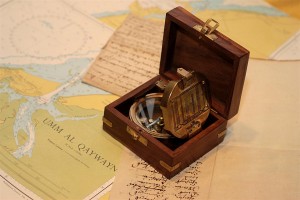 The article I’ve been mentioning and working on in the past couple of weeks is finally online. You can read No More Wrong Turns over at Gamasutra. It deals with ways that Game and Level Designers can steer the movement of players.

Give it a read and please let me know what you think. I’m eager to get some feedback. Feel free to post a comment over at Gamasutra or here on my blog.

Following in the footsteps of the No Murder blogpost comes another tale of immersion.

This time it’s about Kane & Lynch: Dead Men, a third-person shooter where you take on the persona of ex-mercenary Kane. Be warned that this post may contain some spoilers for the game’s story. 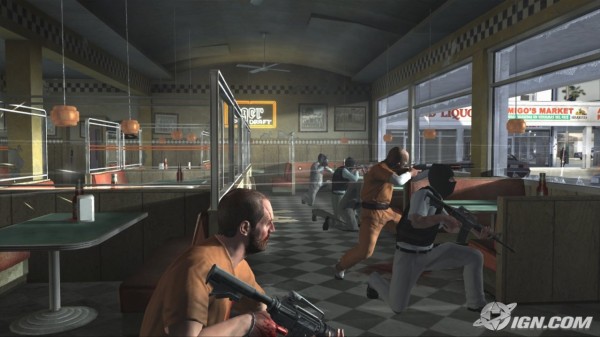 The game opens up with a cinematic of Kane sitting in Death Row writing a letter. While he’s waiting for death he tries to open up to his estranged daughter whom he supposedly hasn’t seen for a long time. Kane is repentant and has accepted his fate. It seems as if he’s made peace with himself.

This is all quite well done, even if the drama is layed on a bit thick, and helped me identify with the character. Kane felt like a complex and believable person and not a two dimensional action hero. Just what you want from a gritty crime story. It was a great beginning to the game and story.

So Kane finishes his letter and gets onto the armored transport to his execution. Just to have a group of mercenaries stop the convoy and free him (including his fellow inmate Lynch). In the confusion and chaos the player can take control for the first time.

Under fire from a variety of cops, Kane is led to temporary safety and given a gun. The rest of the level consists of back alley chases and shootouts with the police until at the very end the gangsters are holed up in a donut shop waiting for their getaway vehicle.

And right there the immersion broke for me because when my version of Kane crawled out of the ruins of the wrecked armored car, he was still a repentant criminal. I (as a player) just didn’t want to shoot at the police. I wanted to get away without killing anyone. And I did manage to stay in cover and evade them (and have my allies mow them down without regret). At least until the scene with the Donut Shop.

Again my image of the protagonist as the narrative had presented him to me was diverging from the game mechanics. My Kane was not a peaceful man and he’d have no qualms about gunning down “bad guys” but he wouldn’t shoot cops. The problem though is that the game forces you to kill cops. A LOT of them. Almost the entire first half of the game is entirely made up of firefights with the police.

After playing Mirror’s Edge peacefully I actually surprised myself by taking the “no cops” stance in Kane & Lynch without really thinking about it. Normally I have no problem gunning down anything that moves as I’m an avid shooter player. Not so here though. My guess is that the game immersed me to such a degree that I wanted to get in character and act like the protagonist. Or at least my vision of him. Either that’s a compliment to the storytelling quality or it’s a holdover after having played Mirror’s Edge before… Or I’m just getting old and soft.

Regardless the reason I did in fact enjoy this experience until the break. I guess it’s not unlike when I’m playing a role-playing game. When I get into character I take actions that are in line with the personality of my protagonist and the narrative as a whole. Often these actions are not the best ones from a game-mechanics point of view. In RPGs I take this sort of behavior for granted but it doesn’t seem to happen that often in Video Games.

Now did you ever experience something similar?

A couple months ago I began playing Mirror’s Edge. In the game you play Faith, an underground courier trying to uncover a conspiracy. A feature of the game is that you can finish it without shooting a single opponent. Motivated by this achievement and the challenge of doing so I decided to try and complete the game peacefully.

Well as peacefully as I could at least. There’s still a lot of enemies, mostly policemen, which Faith has to take down to continue. I restricted myself to fighting unarmed and even though I struggled I greatly enjoyed the experience and felt immersed. I guess playing peaceful, as was in tune with my version of Faith’s personality, helped me get into character. 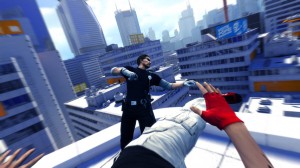 In fact I emphasized so well with Faith that I was genuinely unsettled when at one point in the game I kicked an approaching cop and threw him off a roof. I had tried not to hurt someone and still it had happened. The game makes no distinction here and I was still well on my way to get the achievement but the death of the policeman was still an accident that had a much stronger emotional impact on me than the many other deaths in other games.

And again, later in the game I felt this immersion rear it’s head – and bump it against something. At one point Faith has to ambush a convoy and to do so her courier organisation supplies her with a high powered sniper rifle to do so. Wait, what? How the hell did the peaceful group of free runners get their hands on such a weapon? I don’t know why but I felt somewhat betrayed by and doubted the sincerity of the group. Who knows what I had transported accross the city before. Maybe I had become an unwitting party to weapons smuggling and terrorism?

This was a very odd feeling because I do not think there was any developer intent behind this: The group displays no nefarious ulterior motives during the story and most of it’s members (of the few you meet) are genuinely good guys. If it was intentional and would actually lead somewhere in the story, then it would have been a powerful but subtle method to communicate parts of the narrative. Maybe foreshadow a possible betrayal or deeper corruption.

However as it was, Faith still cooperated with her group normally as if nothing had happened. This is where Faith as portrayed by the game, and as visualized in my head, diverged a bit and my immersion took a few cracks.

Alright, so now E3 is over and after watching the expo on Kotaku and following a few people on Twitter I suddenly find myself looking forward to a couple of new games. And yes, those are a lot and sadly some of those are for the PS3 which I don’t (yet?) possess. So if you care, here’s the list: