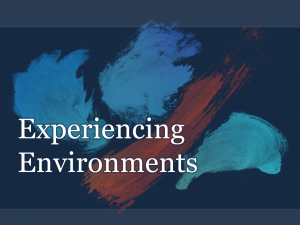 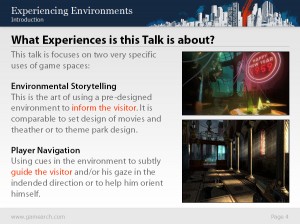 For the last couple of weeks I’ve been collecting material and planning my upcoming lecture at the International Film School in Cologne.

Today I’m finally sitting down to really flesh it out and as a little teaser I’ve uploaded the opening image and an introductory slide. As you can see there the lecture is called Experiencing Environments.

It is about level design focuses on the topics of environmental storytelling and player navigation. The latter will mostly be information from my No More Wrong Turns article but the former is mostly new material compiled for this lecture.

Of course, once everything is done, the lecture is held and any possible feedback is incorporated I will upload it here to share with the greater gaming community.

In the meantime enjoy the previews and if you do have any additional material or interesting links on the topic, feel free to send them my way – there’s always room for more!

There’s a nifty little website out there called Dave’s Mapper. Basically what this web-based tool does is randomly generated classic Dungeons & Dragons style dungeon maps for use in pen and paper role-playing games.

The generation itself is pretty simple as you can propably see: It always uses the same points to connect the different tiles. However there’s quite a bit of content and it’s still growing since creating these “geomorphs” (which is what the tiles they use are called) seems to be a fun hobby for some people. 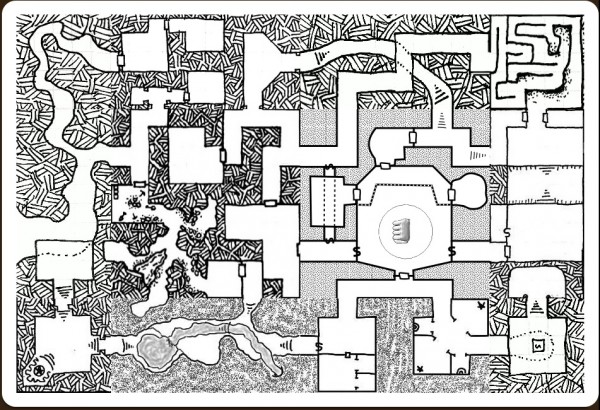 I just found an excellent article that takes a look at the lessons we can learn from both Game and Level Design of Doom. The entire Vectorpoem blog is actually worth a read:

Miegakure is a four-dimensional puzzle platformer. And when I say four dimensional, I don’t mean to use the 4th to refer to time or something equally lame. No, another actual spacial dimension. As far as I can tell the in-development game is played in three dimensions and at the push of a button one of the dimensions can be exchanged with another one. An intriguing concept and worth to watch for the mindbending spaces it is bound to create.

I won’t pretend to know how this is supposed to work but it certainly is interesting. Here’s a video that might help

Sorry for the delay but while I was able to write up the review for the first day of GDC at 4 o’ clock in the morning due to the jetlag, the rest of the days and nights I was way too busy to find the time to do so. However I still want to post the rest of the days but I’ll do so incrementally. That means I’ll start the post for one day, writing up one session, and then adding to that over time until everything is written.

Level Design in a Day: Best Practices from the Best in the Business
Tuesday I decided to check out this full day tutorial. I was expecting a hands-on experience but because the attendance was so massive it was more of a lecture. Actually a couple lectures, each one on a different topic and held by a different Level Designer.

Level Design in a Day: Pre-Production
In this segment Ed Byrne of Zipper Interactive detailed the level design pre-production workflow as it exists at Zipper. It basically boils down to:

There was some discussion on this process among the panel, especially on the last part of Paper Design. A few designers mentioned that they stopped doing 2d paper designs and instead work directly within the engine, whiteboxing the level. The argument against 2d layout plans was that the dimension of height is often underused if a level is planned on a flat piece of paper.

Someone from the audience also made a good suggestion for an alternate Paper Design tool: Google Sketchup and/or Layout. While I haven’t really worked much with either program, I’ve heard good things and might give them a spin sometime.

The second lecture was from Matthias Worch of Visceral Games. He talked about “Digital Ditch Digging”, the meat and potatoes of Level Design. Using Bioshock as an example, he talked about how the experience of the player is shaped by the “physical properties” and “ecology” of a level.

With physical properties Matthias means the walls and boundaries of the environment while ecology refers to the placement of items, pickups and other resources. These two elements combined can create “weighted spaces”, making certain locations more desireable or frequented, creating hotspots and choke points.

Something I really liked was his example of the simple UDK level done with only 10 brushes, 2 wepaons and 1 powerup. This seems like a great exercise for students to learn how to do the most with little detail. All you can do using these tools I whitebox your level.

The slides for this part of the presentation are available online in ZIP format.

Level Design in a Day: Rapid Prototyping using BSP
This section was from Jim Brown of Epic Games. In it he talked a lot about the Unreal Editor as a tool to quickly create levels. Most of it felt like an ad for the tool but there were some nice points, like the fact that the Gears of War team used Kismet (UED scripting language) to even prototype some enemies or items before they were then created in full.

The Anatomy of a Social Gamer: Why Do They Come, Play and Pay?
So after a while I decided to head back to the Social Games Summit to check out this lecture. It sounded interesting on paper but unfortunately wasn’t. The setup was that Marianne Borenstein from playdom moderated the panel made up of average social-gaming joes and janes.

The session then consisted of Marianne asking questions to her guests about their personal history and involvement with games of all kind. The idea was to use this to represent the Social Gaming audience and shed some light on their motives and expectations.

Unfortunately the panel was quite boring and I couldn’t really agree with the basic idea. 4 people are not able to accurately represent the breath of the social gaming audience, regardless of the method used to pick them. 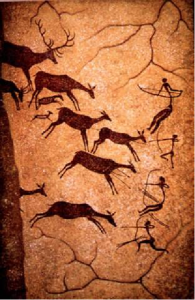 This was the last part of the tutorial that I have notes for. Held by Joel Burgess of Bethesda Softworks, it dealt with the way a level designer can actually tell a story. This was one of the high points of the tutorial with a lot of good thoughts and info.

He started off by talking about the tool of a storyteller, which he separated into two categories: Language and Visual information. The former is direct and unambiguous but brings with it the fact that it’s often tiresome and can be a lot of work to localize. Visual storytelling suffers less from these drawbacks but at a cost.

Joel had a few examples taken from Fallout 3 that emphasized his points. As said, I did enjoy the presentation and you can take a look at Slides in PPTX format yourself.

I’ve been meaning to do this for a long time but kept putting it off. Now it’s finally here: the No More Wrong Turns article in handy PDF format for you to download and print:

The article is released for personal use only. If you want to do something else with it, please get in touch with me. I’ll propably say yes but it’d be nice to know about it.